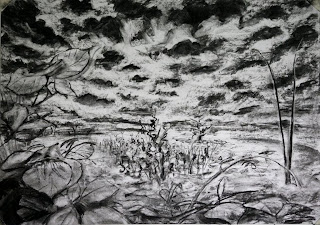 With this sketch I'm trying to work out a tonal composition for an English version of my painting 'Plain at Dawn' (which was based on the Serengeti). I want the composition to take you from close up detail of undergrowth to a distant horizon, then back to the foreground via a big sky. I then tried out some colours and a few different options with a pastel sketch. 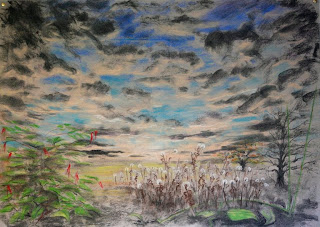 The scene will be a big open space covered with the kind of coarse vegetation found around woodlands and meadows; brambles, rose hips, and a fluffy headed weed with tough stalks. The cloud formation, the plants and animals were all observed around Oxford.


The bramble leaves are sort of quilted so I wanted to accentuate this and make them quite sumptuous in the final painting. This provides contrast with their prickly stems and the angular and crunchy shield bug perched on the nearest leaf.


There is an under current theme of spiky angularity through the painting.


This weed has a soft fluffy head that glows when lit from behind and the curled up leaves are fragile and crispy. 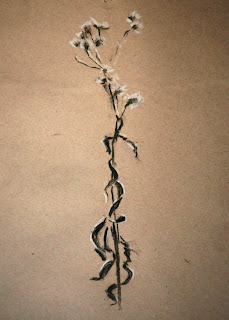 Colonies of these plants often grow along side brambles.


Four autumnal trees like this one feature in the back ground. 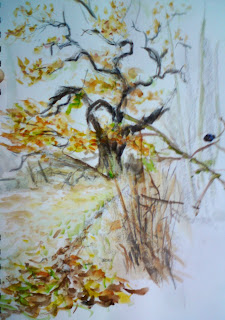 I hope to finish the painting in the next month or so and will post an image of it then.
Posted by Giles Davies at 10:18 No comments: